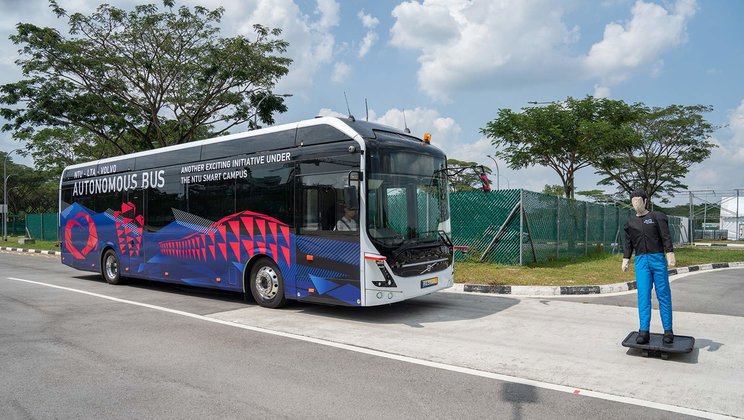 A future of driverless vehicles may be on the horizon. Nanyang Technological University (NTU) is currently collaborating with Autonomous Vehicle (AV) operators on four projects, conducting trials on campus and in nearby facilities. Since 2017, many students have been invited to ride on these AVs.

These trials are part of Singapore’s growing efforts to weave AVs into its current public transport system. By removing driver error and other delays, AVs can make commutes more accessible and efficient if they work well.

Many prominent companies have chosen universities as testing locations for their AVs. Volvo, the Land Transport Authority (LTA) and SMRT all have ongoing projects with NTU, while ComfortDelgro has trials for a driverless shuttle service at the National University of Singapore (NUS).

Meet the buses
For NTU, one project nearing a public launch is a 12m-long automated bus. This project is part of a collaboration between Volvo, LTA and NTU, which they say is a world-first.

The automated bus, which can take up to 80 passengers, was deemed ready for trials in actual traffic conditions after being tested at the Centre of Excellence for Testing and Research of Autonomous Vehicles – NTU (Cetran), a facility near the school.

Other projects that are often seen around campus include the Group Rapid Transport (GRT) by SMRT and Netherlands-based firm 2getthere. Navigating the carpark area between Hall of Residences 12 to 15, the GRT uses magnetic pellets on the road to pilot itself.

Designed to carry up to 24 passengers, the shuttle bus aims to make it easier for commuters to travel to and from bus stops and train stations as a “first-and-last-mile” connectivity solution, NTU president Subra Suresh told The Straits Times in 2018.

Another AV being trialled in NTU belongs to BlueSG, an electric vehicle-sharing firm. Named the NTU-Blue Solutions Flash Shuttle, it runs a one-km test route from the North Hill Hall of Residence to JTC’s CleanTech One building.

This AV can ferry up to 22 passengers and notably takes just 20 seconds to recharge each time for its next trip.

Also being trialled is the Arma, by French transport company Navya SAS. The Arma is a minibus that has been spotted near The Hive and residential halls at North Hill.

All of these vehicles are still being assessed, some of which have been in this stage since 2012. Many of these projects are due to be commissioned for public use later this year.

So, what are we waiting for?
Laws and guidelines surrounding AV technologies in Singapore are still unclear. As Singapore intensifies its integration of AVs into its transport network, several organisations have come together to lay down a provisional national standard called Technical Reference 68 in January.

Compiled by the LTA and other national councils, the document focuses on four key areas of AV application. The document, which is to be refined as AV technology matures, discusses vehicle behaviour, functional safety, cybersecurity and data formats.

Avoided maths all his life and it’s led him here.
osmondchia96@gmail.com

Next post The Cross Island Line dilemma: What’s at stake?